Archaeological science, or archaeometry, is concerned with the application of scientific techniques to historical monuments and sites, cultural artifacts and works of art. Methods range from comparatively simple techniques to sophisticated instrumentation – traditional laboratory benchwork, such as microscopy, to imaging techniques, such as Multi-Spectral Imaging (MSI) analysis and Remote-Sensing, as well as a wide variety of analytical instruments.

Different techniques are suitable for some materials and not others, and they provide data to answer specific, narrowly defined questions. For example, identification of a material may be resolved using polarized light microscopy (PLM) or energy-dispersive X-ray fluorescence spectrometry (EDXRF), or for crystalline materials, X-ray diffraction (XRD). Determining the date of manufacture of an object or its last use (or burial) employs radiocarbon dating (C-14) for organic materials such as wood or textiles and thermoluminescence dating (TL) for ceramics. The prospective origin of marbles are determined using oxygen and carbon isotope analysis and for some gem materials, microscopy together with a suite of analytical instruments may be used, including electron microprobe.

Often, a question or problem cannot be resolved with the application of a single technique. A complicated interplay of factors may account for the state of preservation of an artifact or work of art: they may include intrinsic vice – the components used in the manufacture of the object – or external factors (e.g., burial, fire, water, application of later restoration treatments). The answer to complex questions, such as the mechanisms of deterioration or alteration effects exhibited in cultural objects/works of art – a corroded metal, or discolored pigment or clear coating that has become embrittled, opacified or yellowed with age – usually require a combination of techniques, and finding a solution to a problem may also rely on applying a multi-disciplinary approach, drawing together, for example, the expertise of conservator, scientist or physicist, archaeologist, art historian, and perhaps epigrapher, geologist, botanist or anthropologist.

Fakes, forgeries and restored objects, especially pastiche objects produced from an assemblage of old component parts, present special challenges, since duplicity or at least obfuscation of the true identity or history of an object’s life cycle is deliberate. Objects lacking provenience or provenance – associated information of archaeological context or history of ownership – likewise, make difficult inferring an accurate or complete picture of an object’s place or date of manufacture, period of use or other culturally contextualizing information. Here again, the most nearly accurate or useful information derives from a multi-disciplinary approach and the application of disparate analytical techniques.

Statue of a Centaur. Italian, 18th century copy after an ancient Roman sculpture, rosso antico marble. This statue is a post-Classical sculpture once thought to be a late Roman work of the 2nd–3rd century AD. Extant ancient sculptures of satyrs and centaurs carved from red and black decorative stones are well-documented, but the Getty statue appears to be a pastiche of parts of three or four different red-colored stone sculptures. Based on carving techniques (pointing marks used for copying) and analyses of the stone from different parts of the sculpture, only one of the pieces may be ancient; the rest are from modern (18th century) quarries and the ateliers of modern sculptors. J. Paul Getty Museum, Villa Collection, inv. no. 82. AN.78a. Photo: Jack Ross.

Gemological study and scientific analysis of ancient gems, or archaeogemology, is a subset of archaeometry. It has not been applied routinely in the museum setting; although, gemological and analytical studies have been undertaken sporadically beginning in the 1970s and with increasing frequency since the 1990s. Most studies published to date have focused on the identification of gem materials using gemological methods and geographic provenance of the raw materials using analytical techniques.

Archaeogemology has proven useful for identifying treatment or enhancement techniques applied by ancient lapidaries and for revealing the significance of a rare gem variety, an unexpected origin, and the association of a distinctive material with a workshop or even an individual artist. Gemological and analytical studies also inform a better understanding of the gems described in ancient texts, as well as their possible origins, especially when considered in the light of updated information concerning gem deposits discovered since the mid-20th century. 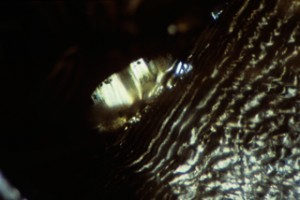 A ruptured fluid inclusion and a “zebra stripes” inclusion in an ancient Roman intaglio carved in citrine provide proof that the ancient lapidary heat treated an amethyst to produce the yellow quartz. J. Paul Getty Museum, Villa Collection, inv. no. 85.AN.370.58. Photomicrograph: John I. Koivula. 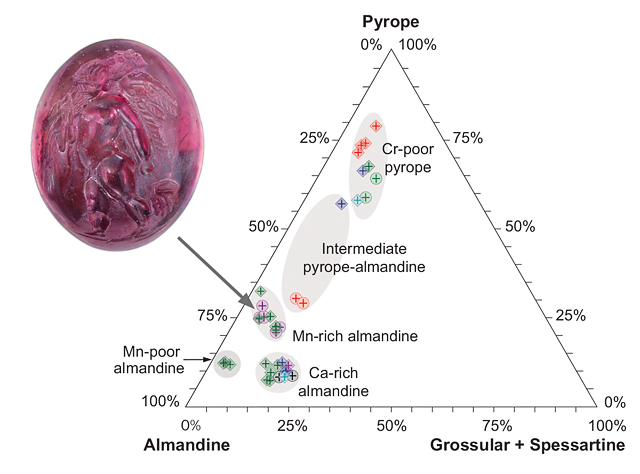 As more data are gathered and published on more gems, statistical analyses may show the specific salient characteristics that reveal associations between individual gems or between gems and their geographic origins. Complete physical characterization of a gem using a suite of techniques, therefore, is as important in ancient gem studies as any single technique that might be applied to address a narrow topic or question. Analytical microscopy is the single most useful and discriminative tool for recognizing possible associations and identifying candidates for further analyses.

Gemstone provenance rarely can be determined on the basis of a single technique, but requires the determination of observable properties, such as inclusions, and quantifiable properties, such as chemistry. Specimens of unknown origin may be compared against data collected from well-characterized specimens of known origin. Data sets needed for provenance studies may be grouped into four categories:

Gemological and analytical techniques are applied to archaeological and historical gem materials selectively: the use of any given test or analysis, as well as the efficacy of using a given combination of tests or analyses is considered on a case-by-case basis for every gem specimen, whose suitability is subject to the condition and fragility of the specimen, as well as the intrusiveness of the technique.

Archaeological science. The application of scientific techniques for dating and provenance determination, and to identify materials and characterize methods of manufacture or condition.

The art of carving, especially gems.

In archaeology and art history – the history of ownership of a work of art. In mineralogy and other sciences – the geographic origin of a raw material such as a mineral or stone.

Archaeological findspot/context of an artifact (not the origin or source of the raw material used in an object's manufacture). 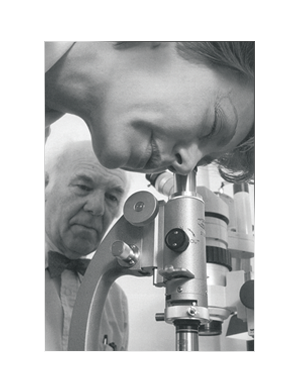 Two views (above, right) of a marble head in the collection of the J. Paul Getty Museum, purported to be from the pediment of the Parthenon and attributed to the ancient Greek sculptor Scopas. Thought to have been an ancient copy of another head, an ancient original now in the Tegea Museum, Greece, the Getty's Scopaic head is shown side by side with a plaster cast of the Tegea head (above, left). The Getty sculpture had been purchased in the 1970s, and after years of persistent questions about its authenticity, a study was undertaken in the mid-1980s to determine whether or not it was an ancient copy of the Tegea head or was instead a modern copy. More than 3400 comparative dimensional measurements were made. The plot points overlaid one another closely, averaging 0.6mm variation between the same points on the two heads (above). Since copying machines were not invented until the Renaissance, the Getty head could not have been copied after the Tegea head in antiquity, but must have been a copy using a pantograph, probably in the 19th century.